You will need one sample of Troll Fat to start Malacath's Daedric quest.

2 guaranteed samples can be found in the following locations (magenta crosses on map):

Standard Trolls are most frequently encountered as randomly generated Monsters. In Monster Dungeons (circles on map), they will be at levels 8-16 (6-8 for boss-level monsters). Outdoors (squares on map), they are found in Forest and Rainforest regions. In the wilderness they appear starting at level 8; along roads, they appear starting at level 6. At high levels (17 and higher), they are only found in Forest regions (not Rainforest regions).

Below level 4, Troll Fat can only be obtained in a limited number of places (magenta circle and crosses), all of which are part of Fighters Guild quests. None of these trolls respawn:

Places where trolls who drop Troll Fat are guaranteed at levels 4 and higher are:

Finally, at levels 6-8, trolls will be opponents in the Arena Grand Champion matches, if you ask to fight against two or three creatures. 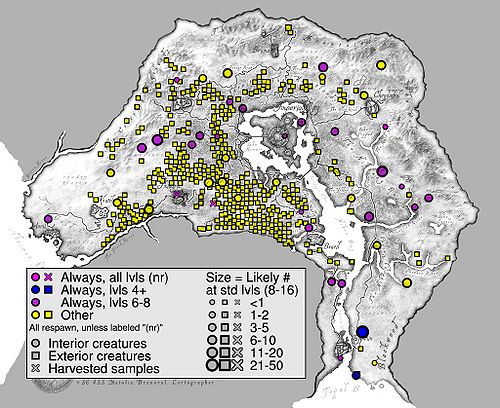 Locations of Trolls and Troll Fat