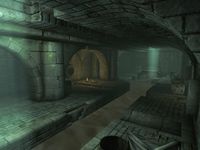 The easiest way to enter this zone is through the door Out from the Market District. However, until the sewer Gate (E) has been opened from the other side, this entrance does not provide any access to the rest of the sewer system. Most characters are likely to enter this sewer system through door D from The North Tunnel, but it is possible to enter through any of doors C through G.

Other than the gate at E and the numerous bandits, there are few obstacles in the zone. Several of the chests in this sewer system are semi-hidden in corners. For example, the boss chest (B) is behind a barrel and some crates. The boss chest is of interest not only for the treasure, but also for the key that opens the door (I) to Beneath the Bloodworks.