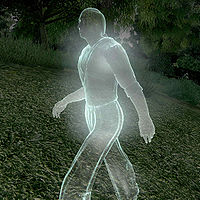 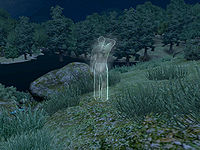 The Forlorn Watchman is the restless, tortured spirit of a Breton warrior named Grantham Blakeley. Grantham was a sailor on the ship Emma May, a ship hailing from Leyawiin whose crew mutinied and was killed when the ship ran aground during a fierce storm. His ghost now haunts the shores near Bravil every night and only by undertaking the quest of The Forlorn Watchman can you lay his spirit to rest.

He wears a set of lower class clothing consisting of a coarse linen shirt, coarse linens, and a pair of oiled linen shoes. He also carries a small amount of gold.

In Bravil, the citizens will often talk about strange sightings along the shore of Niben Bay: "I've sighted the Forlorn Watchman again. Every time I see that ghost, it gives me the creeps." and "Have you heard about that ghost of the old man that looks out into Niben Bay each night? They're calling him the Forlorn Watchman... spooky." Asking them specifically about the ghost will make them point you towards local innkeeper Gilgondorin: "I don't know much about that ghost, but some say he died in a horrible shipwreck. I would stay away from him if I were you... bad omen. Each night, he wanders the shore of Niben Bay. Then he stops and looks mournfully out to sea. If you're interested, you may want to see Gilgondorin at Silverhome-on-the-Water. When it comes to local legends, he's the best source in town." At the Silverhome, Gilgondorin will explain: "The Watchman looks like he may have been a sailor. No one knows where he came from, or why he looks so sad. I don't like talking about the dead like they're some kind of tourist attraction, but that spirit has been making his ghostly journey for years now. We've learned to just accept that he's there. Every night, sure as clockwork, he appears at Bawnwatch Camp at 8 on the shore of Niben Bay. He's never harmed anyone, but most people give him a wide berth. You seem curious enough, so I'll be glad to pinpoint where he appears on your map."

If you wait around Bawnwatch Camp at 8pm, the ghostly Watchman will indeed appear from nowhere, whispering: "Please...", obviously looking for a way out of his eternal loop. A few seconds later, he will take off and cross the bridge towards Bawn, then follow the shore all the way to Fort Irony. If you follow him there, he will speak to you: "I was once the man known as Grantham Blakeley. Look for me in the mouth of the panther. Please... release me." He will then repeat "Release me..." and turn around, looking into the night towards the Mouth of the Panther with a sad look on his face. While Gilgondorin can provide a map marker for Mouth of the Panther, he will deny any knowledge of Grantham Blakely: "Never heard the name Grantham Blakeley before. Means nothing to me, sorry."

After freeing the ghost of Grantham Blakely on the lower deck of the Emma May, he will thank you: "I knew one day someone with unyielding virtue would heed my words and speed my release. You risked much to perform such a selfless act. This noble deed will not go unrewarded. Look upon the ground in this prison. There you will find a map to my gratitude. I thank you with all my heart. Farewell." Both Grantham and The Forlorn Watchman will then be released from the curse, which will cause Gilgondorin to conclude: "The shores near Bravil are no longer haunted. Seems the ghost hasn't been sighted there any longer."