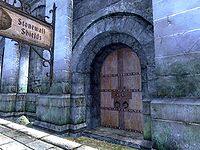 Stonewall Shields is an armor store specializing in shields located in the Imperial City's Market District. It is found close to the Gate to the Elven Gardens District and next to Edgar's Discount Spells

The proprietor, Viator Accius, has 1000 gold and a Mercantile skill of 60. When bartering, he will buy your weapons, armor and miscellaneous items while only selling armor and offer repair services. His wares include the unique shield Tower of the Nine, which drains your Light Armor while fortifying your Block and Heavy Armor and gives you a Shield enchantment. 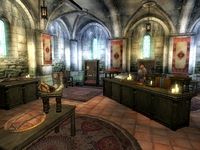 The main trading room is on the ground floor and consists of a counter and several exhibition tables and podiums with Viator's wares on display. The store is dimly lit by the many candles and is decorated with carpets on floors and walls. The front door opens to a table along the northern wall holding a steel shield and a leather shield. On the next table lies two iron shields. The exhibition table in the middle of the room showcases a fur shield, and, carefully placed on a podium, a fur helmet and a pair of steel boots.

On the counter, a podium displays a leather shield and right next to it, a steel shield. A few books are also present: two copies of Guide to the Imperial City and one of Frontier, Conquest. Placed on yet another podium is an iron helmet. The small array of books include four copies of Mixed Unit Tactics, two copies of Manual of Armor, one copy of A Life of Uriel Septim VII, as well as a copy of Manual of Arms. This book can also be found on the shelves in the northeastern corner, along with yet another copy of Mixed Unit Tactics.

Behind the counter are some shelves and leaning against them is an iron shield. On the shelves are two more copies of Manual of Arms and one of Mixed Unit Tactics as well as a pair of iron boots. The small table near the stairs showcases a fur shield. In the other end of the room, near the basement door, is a cupboard filled with food and a sack with clutter. 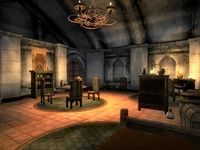 The private quarters consist of a single room, which serves as dining room, workroom and bedroom. All the windows are barricaded and several candles light the room. The table near the door holds three bottles of mead. Along the same wall is a desk with clutter and a love letter and a shopping list. Still following the wall, two barrels and two sacks, all with clutter and clothing. The lectern on the shelves holds even more clutter and on top of the shelves, a copy of Biography of Barenziah, v 1. The unlocked chest near the bed holds silverware and/or gold.

Against the eastern wall, two cupboards are placed back-to-back. One holds clothing and the other one holds food. In the alcove, there is a barrel with clothing, and an unlocked chest that holds up to three pieces of leveled equipment. The remaining barrel and sack both hold clutter. In the middle of the room is the dinnertable. There is not any food to be found, only a bottle of Surilie Brothers Wine. Next to the table is a set of shelves with dishes. 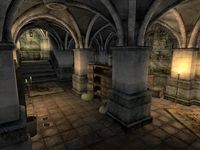 The basement area is where Viator hides all his food and it is pretty much a mess. Along the eastern wall are some shelves with knocked over dishes. Opposite the dishes, another set of shelves holds clutter and four potatoes, as well as an open sack with food. On the lower shelves, a basket holds three samples of tobacco and, on the floor, a watermelon. The two barrels next to it hold only clutter.

In the northeastern corner is a barrel with clothing and on the floor in the opposite corner, a knocked-over bottle of cheap wine. Along the western wall are three crates, all with clutter and a pumpkin on the floor. The barrel in the last corner holds even more clutter.