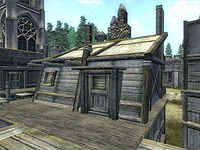 The Skooma Den is a run-down house in Bravil that acts as a shelter for skooma addicts.

Inside the Skooma Den

It stands in the center of Bravil, above Carandial's house. The door is locked and difficult to pick, but inside is a group of skooma addicts who literally can't stop drinking the stuff, not even while talking to you.

The Skooma Den has beds you can sleep in without payment when the addicts are up and about, and the addicts themselves carry a small fortune in skooma that can be pickpocketed off of them (38 bottles in total between them, with three more to be found in a Wooden Chest).