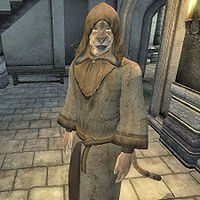 S'drassa in the Leyawiin Guild Hall

S'drassa, a Khajiit alchemist, is an Evoker of the Mages Guild who offers basic Alchemy training at the Leyawiin Guild Hall. He is also an avid collector of crystals and will offer you a job to bring him some very rare ones.

His collection is divided in the two red display cases he owns. One contains three crystals and cannot be opened by any means. This is because the entire display is meant to be only decoration: as all three crystals are in fact static objects and cannot be picked up. The second one has a very hard lock and will be empty until you bring him Garridan's Tears. They are both found in the east wing of the ground floor.

He lives the laid-back life of a collector: he sleeps in the east wing of the ground floor from 10pm until 6am and will then wander around the ground floor for the next two hours. At 8am he will select a book and sit down at his desk to read it until midday. He will then get up and skip lunch, instead wandering around the ground floor until 6pm. After eating a two-hour dinner with his fellow guild mates in the dining room, he will spend the last two hours of his day either wandering around sleepily or reading in the second floor library. He will offer his services between 6am and 6pm.

He wears the rare tan robe with the matching tan hood as well as a pair of doeskin shoes. His only other possession is a leveled amount of gold. He doesn't wield any weapons, relying instead on a set of leveled spells from all of the magical schools.

The very first time you meet him, he will both introduce himself and offer you an assignment: "S'Drassa of the Mages Guild. Evoker and Alchemist. And also, in his scant free time, a Trainer in Alchemy. But... perhaps you are an adventurer? Could you assist me in acquiring something for my crystal collection?" When you ask him to continue he will be impressed: "Straight to the point, eh? Good, I like that. I'm searching for some specific crystals known as Garridan's Tears. If you can locate these objects for me, I'd pay handsomely for each one."

If you decline his offer he will be disappointed: "Very well, If you change your mind, I'll be here." If, on the other hand, you accept this quest he will be delighted: "Wonderful! I had a good feeling about you from the moment that I saw you. I want you to bring me as many of Garridan's Tears as you can find. If you do, I will pay you a fair bounty in gold for each one. I confess I have a weakness for crystals of a magical nature, and I must add these to my collection. This is a personal errand, you must understand. Just between you and I. The Mages Guild has nothing to do with it."

When pursued about the tears he informs you: "The Tears are not just a namesake. They're literally the frozen tears of a knight named Garridan Stalrous who lived many years ago. I'm not certain what happened to the knight, or why the tears were frozen, but I do know someone you could ask. Seek out Julienne Fanis at the Arcane University in the Imperial City. She oversees the Alchemy Headquarters there. If anyone can help you get more information on about these crystals, she can."

He will describe the tears: "The Tears are small crystals, bluish in appearance. Quite beautiful I'd imagine." Every time you speak to him until the quest is complete he will greet: "I suggest you make your way to the Imperial City. Can't make money by standing here." After speaking with Julienne, you can return to S'drassa where he will be helpful: "May I help with any last minute preparation?" When informing him of Tears he will respond: "Well, if what you learned is accurate, then you must protect yourself. It sounds like the cold in the glade is so severe that it could harm you. Perhaps these potions will help." He will then give you five Philters of Frostward to help protect you from the cold of Frostfire Glade. Sadly, that is the best he can do for you: "There isn't much else I can do to equip you for this journey. Only to wish you luck." Once you have located and retrieved the Tears, S'drassa will be overjoyed: "You look like you've seen some travel." If you have collected all five Tears he will be very impressed: "You found five of the Tears? Fantastic! This turned out better than I expected. Perhaps a little bit of a bonus is in order." After paying you, he will gladly announce the Tears with: "They're the pride of my collection."

On the topic of the Refined Frost Salts he will instruct you (whether you already have them or not):"Yes. I've heard of mages who seal portals with an ingredient as a key. Makes the door impossible to lockpick. Refined frost salts sounds like something Julienne would specialize in. You may want to go back to the University and speak to her."

According to S'drassa, joining the Mages Guild is essential for everyone interested in Alchemy: "The Mages Guild is the single best resource for Alchemists in all of Cyrodiil. If Alchemy interests you, talk to Dagail about joining." On the city of Leyawiin, he will tell you a bit about his specialty and give you a few recommendations: "I am the best alchemist in Leyawiin. But if you need Advanced Training, you'll need Brotch Calus in Bruma or Ardaline in Bravil." On the guild itself, he will give you some advice: "All of the local guild halls sell some amount of Alchemic ingredients, but for the best stuff, you'll need to do some exploring on your own." If you find a sample of Nirnroot, S'drassa will be thrilled and point you towards Sinderion in Skingrad: "Amazing. I've never seen a root quite like that before. If you wish to find out a bit more about it, I know just the person you need to talk to. Seek out Sinderion, a resident alchemist of Skingrad. Strange plants are his specialty." When looking to obtain the Leyawiin Recommendation he will say: "That's Dagail's responsibility. Speak with her." S'drassa is quite content with Dagail: "A nice lady, but strange. Talks to herself far more often than one should, in my opinion. Sometimes I wonder why she hasn't just retired, and gone someplace to rest." After speaking with Agata she will ask you to speak with the guild mages to find out what they know about the Dagail's seer stone. S'drassa will comment on Agata: "She's been a great help to all of us in the guild. Without her, I think Dagail would be lost at times." When asked directly about the seer stone he will reply: "I'm afraid I don't know anything about it. I heard it was missing, though. Kalthar was talking about it recently. He seemed very agitated about it. Almost... happy. Strange, isn't that?"