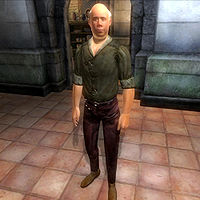 Roderic Pierrane is a Breton commoner who is often found enjoying the spectacle of the Arena District. His home is in the Elven Gardens District where he lives with his wife Elisa. It seems he may be cheating on her, however, as each Sundas, you can find him sleeping with Irene Metrick, though he claims they're "just friends".

On most days, Roderic sleeps from 10pm to 6am with his wife in the upstairs bedroom of his house. He spends all of his spare time relaxing on the ground floor of his house, never even eating. On weekdays he satisfies his bloodlust by watching gladiator matches at the Arena from 7am to 9pm, much to his wife's displeasure. Roderic's bland schedule makes a few deviations for his "friend" Irene Metrick, as long as she remains alive. On Sundas he will wake up at midnight and go to Irene's house where he will share her bed until 4am, at which point he returns to his wife for the rest of the night. He will also meet up with Irene at 7pm on the 5th of every month for an intended three day trip to Bruma. Due to an oversight, Irene never makes this trip. This results in Roderic spending forty-three hours wandering around Irene's house, ignoring the rest of his schedule.[verification needed — Needs deeper CS check] During Light the Dragonfires, Roderic's daily routine will grind to a halt as he and the rest of the residents of the Imperial City are confined to their homes under martial law.

He wears a set of lower class clothing: a collared shirt, laced leather pants, and a pair of huntsman moccasin. He also carries the key to his house and a small amount of gold. His introduction is quite brief, simply stating "I'm Roderic Pierrane." If he likes you enough and you ask him about the Imperial City he will tell you that "Irene Metrick and I spend a lot of time together, true. We're just good friends. But don't tell Elisa. She wouldn't understand." If you find him in the Arena he will tell you "I come to the Arena any chance I get! Once, I got hit in the eye with some spraying blood, and went blind for three days! Now THAT was a good match!".

His wife Elisa will comment on her husband's habits often. When asked about the Imperial City, she will proudly say: "Roderic is looking around for a business to invest in. I know he'll find something soon." On the contrary, if you run into her while she is at the Arena, it becomes apparent that Roderic might be investing their money somewhere else: "Aggh! I hate these disgusting Arena matches! I'm here looking for my husband, Roderick [sic]! If he loses any more of our money he's a dead man..."