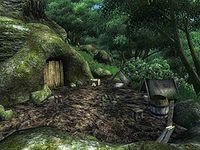 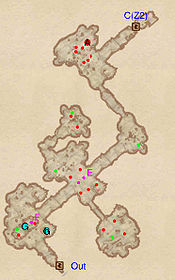 You enter this zone at the entrance (Out) and connect to the second part of Rockmilk Cave through door C. The main obstacle getting through the cave is the unusually large number of enemies, although (as mentioned in the notes) the enemies will tend to spend their time fighting each other. There are also a couple of traps. 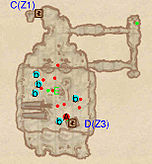 You enter this zone through door C; door D is simply the entrance to the tent. Be sure to enter the tent, because the boss-level chest is within. All ten of the NPCs in this area are involved in a single large melee. Therefore, it is possible to strike a single finishing blow, and as a reward loot ten corpses and multiple chests. Your biggest challenge is likely to be just figuring how to carry all the loot out of the cave.