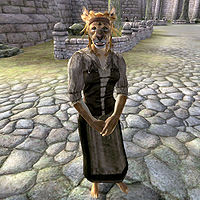 Rancid Ra'dirsha is a Khajiit beggar living in Leyawiin. Her bedroll and food bag can be found in the southwestern corner of the city. You may contract the witless pox and blood lung diseases should you fight her.

Her daily routine is slightly different than other beggars: She wakes up early in the morning at 5am and wanders around her bedroll for one hour. At 6am she takes a long walk to the northeast entrance of the city and begs for money and food for four hours. After she is done trying to earn some money, she will move to the alley between the Leyawiin Fighters Guild and the Blackwood Company strolling around until 2pm.

At that time she will change her location again, this time in front of the Great Chapel of Zenithar begging to any of the townsfolk passing by. After four hours, at 6pm, she will retire to her bedroll to grab a piece of food from her sack and have her only meal of the day for two hours. If her sack is empty she will just walk around until her bedtime. After she has had her meal, she will go back to stroll around the area until her bedtime at 11pm. On rainy days she will instead seek shelter under the roof of the Five Claws Lodge.

Her attire consists of a shirt with suspenders along with breeches. She may also be carrying any amount of money that she earned during the day.

Like the other beggars in Cyrodiil, she can indicate you how you may be able to join the Thieves Guild and she will also inform you of the Countess' secret during the Ahdarji's Heirloom quest.