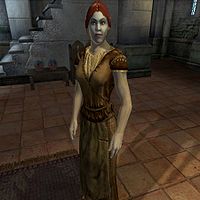 Ralsa Norvalo is a Dunmer commoner who lives in the Imperial City Temple District with her husband, Gilen. Once your fame reaches five, Ralsa is likely to come running up to you if you pass through the Temple District, and ask you to start The Order of the Virtuous Blood quest. If you are in a rush to start the quest, you can also track her down in her house where she appears to stand around most all day and night (although you still need to meet the fame requirement).

Allowing her to run up a second time or seeking her out after initially rejecting her clearly excites her: "Good, you're back!" and "You've come back! Have you reconsidered?" Refusing again leaves her very worried as she says, "Oh... I see. Well, if you change your mind, come see me and I can fill you in on the details. Please, reconsider soon... I'm worried about him." but offering your time unfortunately seems to be nearly as stressful for her: "Normally, I wouldn't approach a total stranger like this, but Gilen seemed so insistent. Please, forgive my audacity..." After reassuring her she'll get to her point, explaining, "Thank you. Gilen always tends to exaggerate, but in this case he sounded earnest which worries me a bit... He said to tell you that the matter he needs help with is of the utmost importance to the citizens of the Imperial City. You're to meet him at Seridur's house which is located in the Temple District. He said all will be explained when you get there. That's all he told me to say." Agreeing to the meeting leaves her relieved as she finishes with a polite, "Thank you. I'm sure he'll be pleased. I must go now. Good day to you." and her job is clearly done at this point as she'll brush off any further attempts at conversation with, "I really can't help you with anything else. Please, go see Gilen at Seridur's house."

She opens back up once you've spoken to Seridur: "Nice to see you again. Is there something you require?" However she doesn't have a lot of information to give, saying only about Roland Jenseric: "Don't really know him. He lives across the way from Seridur I think." As for the notion of vampires, she's very amused and laughs, "Vampires? Hahaha! You have been speaking to Gilen. That silly old man keeps reading books about those creatures. I hope he hasn't gotten you wrapped up in some foolish errand." If you decide to let Roland live and question others about Seridur, Ralsa's response will be less than impressed: "Seridur is a nice enough fellow. For an Altmer, that is. I think he and Gilen, and that Argonian, Grey-Throat, have some kind of a club. They're very serious about it, but I'm sure it's just some boys night out kind of a thing." She doesn't seem to be aware of (or at least not care very much about) Seridur's death, as she has no comment on it even when her husband does, and after the quest is finished has no relevant dialogue whatsoever.

When you first get to Seridur, he will mention Ralsa a few times, saying, "It's an honor to finally meet you. When I heard you were in town, I just had to send for your help. Your reputation precedes you. Oh, allow me to introduce myself. I am Seridur. Sorry to send Gilen's wife to get you in that manner, but it seemed safer if we weren't seen on the streets right now."

In contrast to her husband's middle-class clothing, Ralsa wears a lower-class outfit that includes a belted vest, a pair of coarse linens and a pair of oiled linen shoes. In addition, she holds her house key and a small amount of gold.