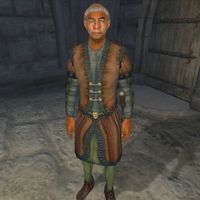 Orrin is a Redguard blacksmith, and a Thieves Guild fence located in the Anvil Castle Smithy. His barter services are only available after you have joined the guild and have been promoted to the rank of Shadowfoot by completing the quest Taking Care of Lex. During the same quest, Orrin will readily show you an easy route to the inner chambers of the Castle, thus helping out with the reassignment of Hieronymus Lex.

Because of his affiliation with the Guild, Orrin lives a low-key and anonymous existence within the Castle. He sleeps in his private room in the Smithy between midnight and 6am. When he wakes up he enjoys a two-hour breakfast, and at 8pm he has a formal dinner with the other castle residents in the dining hall. At all other times he can be found wandering around the smithy. During the quest, Orrin will break off this routine briefly: "You must be the cat burglar I've been told to expect. Follow me." He will then escort you to the secret wall and activate it, granting you illegal access to Dairihill's desk in the Private Quarters. When you reach the required rank, his services will be available 24 hours a day; similar to all other Fences, Orrin will not barter with you when moving from one location to the other.

Orrin wears a russet felt outfit and a pair of quilted shoes. He is armed with a club and carries the Anvil Castle key and some gold.

Before you have joined the Thieves Guild, the cautious smith will not even bother to greet you and will deny any knowledge on his supposed bartering services. After you have joined up, things will be slightly different but he will still deny you services, due to your rank: "I can't help you until you advance further in the guild. You can use one of the other fences, like Ongar in Bruma." After the reassignment of Lex, S'Krivva will say: "You are being promoted to Shadowfoot, and may now use Orrin of Castle Anvil as your fence." and will elaborate: "Orrin is a respectable fence, if there is such a thing. He's got a decent amount of gold, but is a tough negotiator. Go to him instead of Luciana." Sure enough, Orrin will confirm he is a fence if you ask him where to find one. However, he will show a bit of jealousy toward top Thieves Guild fence Fathis Ules: "What, I'm not good enough for you? You think Fathis is going to give you the time of day? I'm just as good as he is. Show me your stuff. I can move anything." When you begin to barter with him, he will shush you: "Shh! Keep it down. This isn't exactly legal." If his disposition toward you is greater than 70, he will be much friendlier: "You always bring in good business." Orrin may then use some of the following unique lines of dialogue to comment on your business negotiations with him:

Buy an item: "If you need any more of those, I might be able to get some later."
Sell an item: "Sure, why not. I might even be able to ransom it back to the original owner."
Offer refused: "Don't try to cheat me you misbegotten whelp!"

After the transaction he will say: "Remember, act casual, like we haven't done anything illegal."