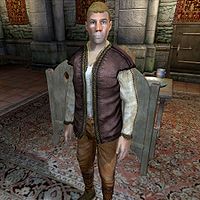 Kastus Sintav, a Breton commoner, is one of four nephews of Iniel Sintav living in a common-sized home in the Elven Gardens District of the Imperial City. Kastus has two brothers, Beran and Vontan, that live with him. His brother, Cyronin, has had a dispute with Talos Plaza District's resident Helvo Atius, which caused bad blood between the Sintav and Atius clans.

Kastus lives a fairly relaxed life in the Imperial City alongside his two brothers. On a normal day, he wakes up at 6am to head down to the main area of his home. He wanders around for the next four hours, occasionally stopping to have a conversation with Beran or Vontan. On any weekday (see bugs), he leaves the house at 10am to head outside to the Elven Gardens District. He strolls around the area for seven hours until he heads back home at 5pm. He proceeds to wander about for an hour until he locks up the building at 6pm to have a private two-hour dinner with his brothers. After finishing his meal, he unlocks the door for any potential visitors at 8pm. He will then walk around the house for another four hours until heading upstairs to go to bed at midnight.

Kastus' schedule is slightly different on the weekend. On Loredas, he still wakes up at the same time. However, he lazily wanders around the house all day long until his two-hour dinner at 6pm, skipping his trip outside to walk around the Elven Gardens District. After his dinner, he continues wandering around the house again until his usual bedtime at midnight. On Sundas, Kastus still wakes up at 6am and will then proceed to wander around the house until 9am. At this point, he heads over to Iniel Sintav's house along with all the other members of the Sintav clan. He engages in conversations with his family and follows Iniel around for the next 12 hours. Specifically, he will wander around Iniel's house until noon. At this point, he and the other Sintav family members will follow Iniel to the nearby The King and Queen Tavern. He watches Iniel eat his lunch for the next two hours, until they leave the inn to return to Iniel's house at 2pm. He then wanders around the house for the next seven hours, until he leaves at 9pm to head back to his own home to resume his usual schedule. The only exception to this schedule is during the Light the Dragonfires quest when Kastus, like most Imperial City citizens, is confined to his house.

He wears a set of middle class clothing consisting of a brown shirt, tan linens and a pair of pigskin shoes. He also has his house key and a small amount of gold.

When approached for the first time, a happy Kastus will greet you: "Kastus Sintav. Uncle Iniel got us good jobs gardening. We're very grateful." He will be less happy when asked about his city of choice: "Whatever Uncle Iniel says. 'Lay off the Atius bastards,' he says, so we lay off."