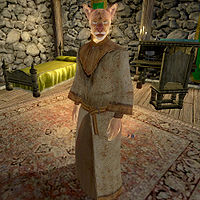 J'skar, a Khajiit mage, is a Journeyman of the Mages Guild who offers basic Destruction training at the Bruma Guild Hall. Along with Volanaro, he greatly enjoys playing pranks on Jeanne Frasoric, the local guild head. His latest favorite is to make himself invisible and hide somewhere in the guildhall. The Bruma Recommendation quest involves tracking him down while he's doing this. Though a prank at first, this ability saves his life later on, when the guild hall is attacked during the A Plot Revealed quest. Because he was invisible, he is the only survivor of the attack.

He doesn't exist in the game before Stage 10 of the Recommendation quest, and while under the effect of a Chameleon spell, he will never eat, and will spend the whole day walking around randomly in the guild basement, trying his best to hide from Jeanne. After you have stolen the book Volanaro requested, at 10pm he will travel to a basement room and will remain there until 4am, waiting for Volanaro to dispel him. Talking to him while he is invisible will cause him to say: "Go away! You'll ruin everything!"

Once Volanaro makes him visible he will say: "Hello there. I hear you've been looking for me. Please, don't be mad. We were just having some fun. We just get tired of Jeanne lording her position over us, when she barely knows anything about magic. Every now and then, we like to trick her. We figured it was time to move on to a new prank. This one was getting boring, anyway. So you can tell her you've found me!" If you find him yourself he will be annoyed: "Oh, you're no fun at all! It was just a harmless little prank, that's all. Why did you have to go and ruin it? Well, I guess we'll go back to the drawing board. Fine, go tell Jeanne you found me. I was getting tired of being invisible all the time, anyway."

His ordinary schedule which starts the moment he is made visible, is very simple: eating from 5pm to 7pm and sleeping from 10pm to 6am of the next day. The rest of the day he will wander around the living quarters of the guild building, where he will offer his services. Perhaps the reason for playing pranks is the boringness of Bruma: "There's not much to do here in the Bruma Guild. If you can get to the Arcane University, though, they let you make your own spells there."

He doesn't seem too repentant: if you ask him about Jeanne he will smirk: "Finding ways to confuse her just never gets old for me. It's good practice of our skills too. But it's mostly just funny." If you inquire about the prank he will tell you: "Well, it was fun while it lasted. I'll have to start thinking up something new to try."

J'skar's Destruction skills are known all over Bruma. When asked for rumors, or during private conversations, they will say: "I heard that J'skar at the Mages Guild is quite good at blowing things up.", "Did you know that J'skar trains other Mages Guild members in Destruction?", "Have you ever wanted to learn to use destructive magic? I hear J'skar can teach you." or "Don't get on J'skar's bad side. You'll likely get a fireball in your face for your troubles." Others will simply comment: "I've heard that J'skar has great skill at making things explode.", "Those are dangerous skills for a novice. I hope he trains people well." and "I wouldn't cross him. I've heard he's very skilled."

During the second related quest he will remain hidden in the destroyed Guildhall, concealing himself with his invisibility spell and eluding Camilla Lollia's attempts to locate him. Once you have killed her, he will make himself visible and speak to you, recalling seeing The King of Worms: "Are they.... are they gone? I was too afraid. I just couldn't move. I could hear the screaming, but I just couldn't move! He killed them all. Just... slaughtered them. I... I saw his face. I saw the King of Worms! I couldn't believe my eyes. I think the only reason I'm alive is because I was invisible... but even so, I think he saw me. He killed them, one by one. Volanaro was last, I think. He was trying to run away, but he didn't make it, did he? The King of Worms stood over him, right before he died, and he... well, it looked like he sucked out Volanaro's soul! He said something about Echo Cave, and destroying the Mages Guild. Then he looked right at me, and grinned! You've got to do something. You've got to tell Arch-Mage Traven! He might come back if he knows I'm still here. I'm not staying here! I'll go to the Imperial City. Hannibal Traven can protect me. It's not safe here! Leave before he comes back!" If you speak to him again he will say: "I'm not staying here any longer. I need to get someplace safe."

He will then run all the way out of town towards the safety of the Arcane University. After taking the Silver Road and the Red Ring Road he will cross the Talos Bridge after eight hours of traveling. At the University, he will seek shelter in the Arch-Mages Lobby, where he will be found wandering around or sitting on a bench until the quest is complete. He will still offer his services, this time for the whole day, but only if you have completed the quest by talking to Arch-Mage Traven. Speaking to him again at the university will yield the same response as at the Bruma guildhall. As soon as The Bloodworm Helm quest is started, J'skar is disabled and therefore can no longer be found anywhere in the game.

He wears a mix of lower and middle-class clothing: the cheap but rare tan robe and a pair of pigskin shoes. He also carries a Mages Guild Key and a leveled amount of gold. He doesn't carry any weapons, relying instead on a range of spells: his custom Invisibility spell, a Dispel on self and a leveled set of mage spells.

He also owns the Illusion skill book The Wolf Queen, v 3, which is found on top of a writing desk in the southwestern basement room, where he usually sleeps.