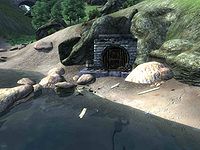 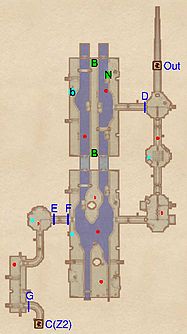 You enter this system through the door at Out. To progress, you will need to work your way south to door C. This will require opening a sewer gate (E), using the adjacent Turn Wheel, and opening the locked gate at G.

The only notable treasure in this zone is all in the northwest room: two boss chests (B) and a Nirnroot (N). Although the map makes it look like you can access this room from the south, those two connections (grayed-out in the map) are both underwater tunnels that are too low to get through. Therefore, the only way to access the boss chests is from the east, by opening gate D. That gate can be opened using the Turn Wheel (cyan dot) in the middle room of the three eastern rooms.

You will generally enter this zone at the north end, through door C. It is a straightforward path from there to the final room, containing both doors D and E into the Market Sewers. Door E is the best door to use to enter the Market Sewers. There is no notable treasure in this zone.