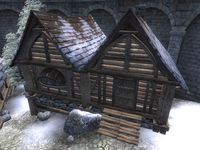 ^aThis NPC only resides here during Turning a Blind Eye. 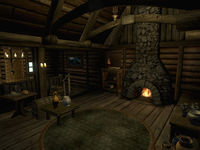 Inside of Helvius Cecia's House

In the north corner of the ground floor, along the narrow balcony, are a clutter sack, a grain sack, and a food barrel. In the west corner is a cupboard that also contains food and on the southwest wall is a chest of drawers that holds clothing. Around the column sits a food barrel, a locked chest containing weapons and armor, a handbill from Novaroma, and a table that holds a loaf of bread a cheese wedge, and a bottle of Surilie Brothers Wine. At the head of the stairs leading down sits a bookshelf with a pair of light brown linens, a pair of quilted shoes, and three bottles of mead in addition to a few books. At the foot of the stairs are a desk and barrel that both contain clutter. A cupboard holding dishes sits next to the column, and another locked chest that can hold gold and/or jewelry sits on the northwest wall. A double bed against the southwest wall has a bottle of mead sitting on the bedpost. In the west corner a bookshelf holds five more bottles of mead. A nearby locked cupboard holds clutter with a final bottle of mead and a copy of Followers of the Gray Fox on top.