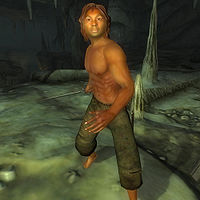 Goblin Jim is a Breton witch and the Shaman for the White Skin Goblin Tribe located in Goblin Jim's Cave.

Although nobody will speak of Jim himself, Fadus Calidius will tell you of his cave: "You heard of 'Goblin Jim's Cave'? It's a big one. It's a long walk due north of Skingrad, in the Imperial Reserve... a long way from civilization."

Goblin Jim spends all his time aimlessly wandering around Goblin Jim's Pantry, the third zone of his cave. If the White Skins succeed in recovering their totem staff and it's brought into the zone, he will run off and attempt to retrieve it. If the staff is successfully returned to its correct position in the stable-like building, Goblin Jim will restrict his aimless wandering to an area just around the building.