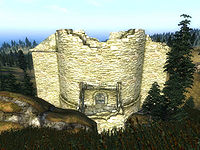 Fort Hastrel is a medium-sized fort north of Kvatch containing vampires. It is west of Camp Ales and southeast of Last Chance Camp. It contains two zones: Fort Hastrel and Fort Hastrel Keep. 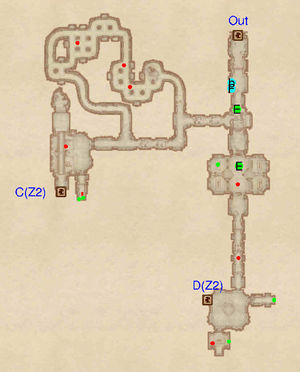 Upon entering the fort, you will find a Dead Treasure Hunter (F) lying next to a bedroll (b) and an Arrow of Embers (on the ground at E).

Continue due south, down a flight of stairs. In the next room a vampire guards four coffins, of which only one has valuable loot, and a second Arrow of Embers (E). In the final room are two alcoves. Each contains a minor loot chest, with the southern one also housing a vampire.

When returning through door C, you will be on the upper level of a room, and able to snipe down at the two enemies below. An alcove to the south contains two more minor loot chests. You can make your way back to exit quickly by keeping to the right and following the corridors. Alternatively, turn left and pass through a series of rooms containing three enemies but no loot. 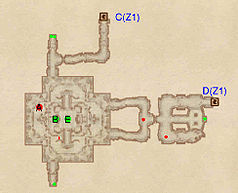 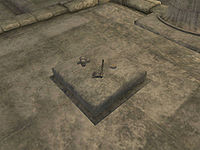 The items at E

After entering from door D, head left to loot a chest before proceeding west. Fight your way past a rat and another enemy before arriving in the main room. This is structured around a large central column. On top of it, at E, you will find a War Axe of Seduction, a pair of steel gauntlets and a cheese wedge. You can reach the top of the platform by climbing the stairs on the south side, although Acrobatics above 50 is recommended.

The room also contains up to two enemies, one of which one is a boss-level vampire (A), a boss chest B and a minor loot chest. Head north, loot the two chests in the alcove nearby, and return to the previous zone via door C.