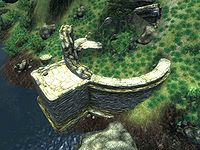 It lies on the shore of Lake Canulus, far to the east of Bravil. 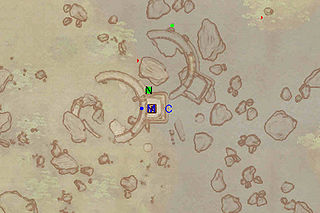 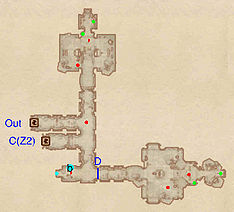 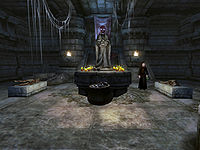 The lair in the southeast 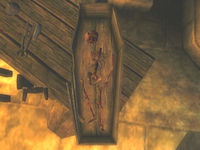 You start in this level at an intersection: heading left leads to a chamber with up to two enemies and two minor loot chests; while heading right leads to most of the level. The entrance to the second zone, (C), is located in a corridor adjacent to the door you came in from.

The southern section is much more interesting. In front of gate D is a small experimentation area with of a stone bed (b). Atop the nearby table is an open coffin containing a child's skeleton as well as his overalls; a soul gem and other items. Use the switch (cyan dot on the map) on the wall to open the gate and enter a large chamber containing two stone altars with Headless zombie corpses. 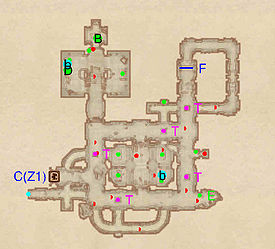 This zone is quite complicated, as it effectively presents two levels, one placed atop the other. The central part of the upper level is a large room with a corridor looping around it. You can enter the room from the corridor on either the north or the south. Making your way counterclockwise around the corridor is the best option, but be mindful as you could wind up fighting against up to four enemies at the same time. While making your way around, take care to avoid the Broken Grate traps (T), which cause you to fall to the lower level. Sneaking may also be useful as the enemies below will normally detect you, blowing your chances of surprise.

In the eastern portion of the corridor is an enemy hidden behind two thick tapestries which are likely to trap him and therefore make him easy to dispatch. Collect the various loot, including the various items found at E and head northwest to a room containing three minor loot chests, a boss chest (B) and an assortment of precious items (D). To reach the lower level, you will have to fall down one of the grates. The fall damage is limited, but be prepared for cramped, close-quarter combat with multiple enemies. Make your way to the western end and activate the switch (cyan dot on map) that opens gate F and allows you to backtrack to door C.