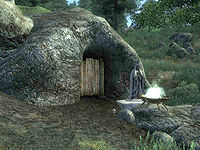 Like the other zones of this dungeon this one is very extensive and has a large number of intersections. The first room you enter is a large chamber with two ledges on opposite sides. You and an enemy are on one of them. Try to proceed with stealth here, taking out the enemy closest to you and then the other two. On the opposite ledge is an altar with the Security Skill Book: Advances in Lock Picking (F)

To continue take the stairs leading down into the crevasse between the ledges. The tunnel that exits the crevasse leads to the first intersection. This is probably the most important of the level: if you go straight north through the intersection, you will pass through a series of corridors and small rooms until you reach trapdoor C to Fingerbowl Cave - Servant Crypt. Only one room is located slightly off-course but is easily identifiable.

If you turn east at the intersection, you will first arrive in a room with trapdoor E to Fingerbowl Cave - Lord Crypt and another intersection. Head east through the tunnel in the southeast corner, as the tunnel in the northeast corner only leads to a Cave In Trap (T). In the next room you are faced with yet another intersection: the northeast tunnel leads to trapdoor D to Fingerbowl Cave - Noble Crypt while the southeast tunnel leads to a small room with an enemy and a minor loot chest. Be wary of the Cave In Trap in the corridor.

In comparison with the other zones of this cave, this one is fairly straightforward. You enter from door C and immediately find yourself at an intersection. If you turn south you will quickly find yourself in a very large chamber containing a large number of stone coffins, the Boss-level Undead (A) and the Boss Coffin (B).

If you turn north you will arrive in a large room absolutely filled with stacks of coffins. You will also find two enemies and a Zombie corpse. Of the many coffins, only 6 contain some loot: 3 in the right end of the room, 1 in the center and 2 in the left end. The next room also contains a large number of coffins and an enemy. Again, only one contains loot. 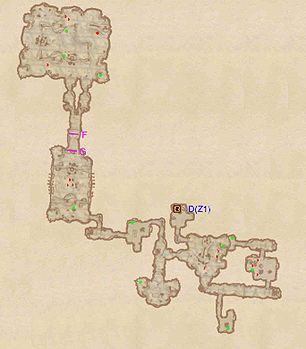 Like the first zone, this one is also quite complex, with plenty of winding passages and intersections. In the first room you enter from door D you are immediately faced with one - the south tunnel leads you through a series of passages until you reach a small room with up to 3 enemies; along the way are two minor loot chests.

The west tunnel brings you to the better part of the current level. A series of corridors and small rooms lead you to a large chamber, where you will find yourself on a ledge. On a lower level are up to three enemies; try to use the advantage of the high ground to your favor by taking them out while they are below you or trying to climb up.

In the next corridor be wary of the Falling Logs Trap (G), which is activated by the tripwire at F. You may also use it to your advantage to take out the enemies in the next room. The final room is quite large and contains up to four enemies; try to take them out one by one. 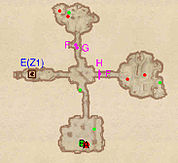 This zone, which resembles a mine with its big wooden structures in the middle of the rooms, is quite small and relatively straightforward. Immediately after entering from door E you will find yourself at a three-way intersection. If you go north, be wary of the Swinging Mace Trap (F), which is triggered by the pressure plate at G. The passage leads you to a room with two enemies and a minor loot chest.

Straight east is a corridor with yet another Swinging Mace (also F) which is this time triggered by the tripwire at H. The next room also contains two enemies and a minor loot chest. If you head south, you will notice that the corridor is trap-free, but you will find a Boss-level Bones Undead (A) guarding the Boss Coffin at B inside the next room.