Fanacasecul is a small Ayleid ruin west of the Imperial City containing undead. It contains only one zone, Fanacasecul. 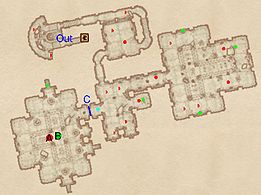 Your main objective in Fanacasecul is to collect the items from the boss chest at B and the ten Welkynd Stones scattered around the dungeon. If the boss chest is your only goal, you can gain quick access to it through door C, and entirely avoid the large eastern room with three minor loot chests, four Welkynd Stones and two enemies. If you want to explore, be careful not to step on the pressure plate in front of gate C (cyan dot on map), which unleashes the boss level undead at A. If you do so, fight the boss, as it is conveniently isolated and will not alert the other inhabitants. The boss chamber contains four additional Welkynd Stones, while the last two are in the room with the pressure plate.