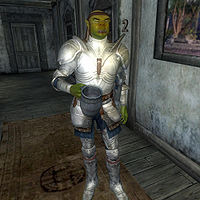 Dubok gro-Shagk is an Orc warrior who's causing trouble at the Five Claws Lodge. He's a member of the Leyawiin Fighters Guild, and along with Vantus Prelius and Rellian, he is sitting around being drunk and disorderly because there is no work for them to do. Vantus is the one to talk to about their little problem. After completing the related quest Dubok gro-Shagk can be found outside of Undertow Cavern.

Dubok wears a steel cuirass, greaves and boots. He is armed with a silver mace and carries a pewter mug and a small amount of gold.

Approaching Dubok gro-Shagk during your investigation into the trouble he and his compatriots are causing will have him immediately voice his disapproval of your involvement: "Don't butt in." If you ignore his comment and start a conversation with him he'll greet you by rudely saying: "Whadda you want?" Inquiring as to why he's causing trouble will have him claim that he has nothing else to occupy his time besides drinking: "No trouble here. No nothing here! No fun. No work. Nothing! Blackwood Company's got all the work. There's nothing left for us! 'Cept for drinking." Asking him about the Blackwood Company will have him provide you with some background information on the group before directing you towards his group's leader, Vantus: "Haven't you heard of 'em? Former soldiers, sent down into the swamps to take some territory back from the lizards. Talk to Vantus." Whenever you end a conversation with Dubok before agreeing to help the group he will voice another remark to make it clear that you're not welcome: "Shove off."

After you've agreed to help the three unemployed Fighters Guild members his tone will change somewhat. He'll ask you about your progress with finding the group work if you approach him: "Whatcha got?" Speaking to him will have him remind you that you need to help them with their employment problems: "Are you still talking? Find us work. And money." Asking him about Fighters Guild jobs will have him say: "Jobs are good. I need more money. So I need more jobs. For money." Questioning him about the same topic after you've found work for the group, but haven't told Vantus yet will have Dubok suggest that you speak with Vantus if you've found them work: "Work is good for money. You know something, tell Vantus. He'll put me to work. Give me money." If you end a conversation with Dubok before you've resolved the group's problem will have him once again remind you that they need help as you part ways: "Show me something."

Dubok will shout several random insults at the other people inside the bar. At Vantus, he'll have these lines to say: "You need to find us work. You're supposed to be boss!" "You don't find something soon, I'm gonna lose my temper." "I'm tired of wasting time with you!" Dubok gro-Shagk will have several comments directed towards Rellian: "Never liked you, Redguard. Never will." "I'll snap you in half, little man." "I'll show you where you can put that fancy sword!" He'll have the following to say to the bartender, Witseidutsei: "More beer, sweetcakes!" "Send over a drink. And make it quick!" "Settle down, pondscum." He'll also direct some remarks towards you: "You don't belong here. Get out!" "What do you want?" "Stay outta my business!"

After you've spoken to Vantus to report the new work you've found for the group, Dubok's attitude towards you will change drastically. Whenever you approach him he'll greet you by saying: "You're okay." Speaking to him will have him happily greet you by saying: "Hey, it's you. The one who found jobs. Whadda you need?" Asking him about Fighters Guild jobs now will have him say: "Looks like you found work for us. Good. Need some money." Ending a conversation with Dubok will have him say the following as you part ways: "Yeah. Nice going."