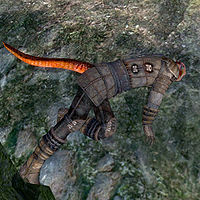 The Dead Argonian Agent was sent by the Argonian Royal Court to assassinate Scar-Tail for his crime of fleeing Black Marsh and refusing to fulfill his duties as royal assassin. This is regarded as an act of treason, with execution as the only punishment. The agent managed to wound Scar-Tail, but was killed in the process. He only appears at stage 10 of the related quest.

He wears leather boots, greaves, cuirass and gauntlets and wields a silver dagger. You can also cut out his heart, which can be used during the related quest.