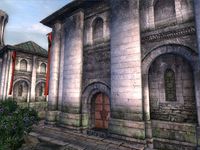 Cyronin Sintav's House is a home in the north end of the Elven Gardens District of the Imperial City. The house neighbors the home of Irene Metrick. 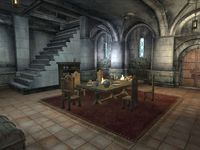 The front door opens to a large dining room. On the table, there is a total of two carrots, two pieces of boar meat, two potatoes, three radishes and four strawberries. More food can be found in a cupboard in the east corner. Also in this corner is a chest containing clutter. Adjacent to this is a shelf with three bottles of mead on top of it. Next to the stairs is cupboard containing clutter. Across from the door to the private quarters are two barrels that hold more clutter. 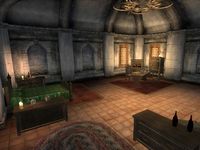 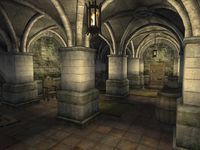 The basement holds very little of interest. There are mostly just barrels, crates, and shelves holding clutter and a sack containing random samples of food. The only item of importance is a locked chest holding weapons and/or armor.