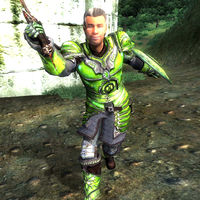 Claude Maric is a Breton rogue who can usually be found in the Talos Plaza District of the Imperial City or staying at the Roxey Inn just outside the city with the mercenaries in his employ, when he's not treasure hunting in the area's Ayleid ruins.

He also works as a treasure hunter for Umbacano during the quest Nothing You Can Possess, where he will relocate to the Imperial City and track you upon leaving Umbacano Manor. He will take you to The Tiber Septim Hotel and he will offer you information about The High Fane. After retrieving the carving from Malada, he will relocate to outside the ruin at stage 50 of the quest. After the ambush, if he survives he will join you to escort Umbacano through the Ayleid city of Nenalata. He will make his way towards Nenalata at stage 60 of the Secrets of the Ayleids quest. Should he survive until the end of the quest, he will make his way back to the Roxey Inn.

He is equipped with a nearly full suit of leveled light armor, all of the best possible quality for your level and potentially enchanted. The only piece of armor he is missing is the helmet. His weapon is a short sword, again of the best quality and possibly enchanted. Out of combat, he wears a brown shirt, tan linens, and doeskin shoes. He also has a small amount of gold. He will know one leveled Illusion spell.