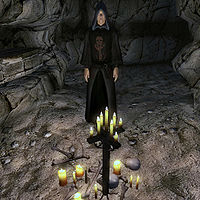 Celedaen is a High Elf necromancer who has taken up residence in Leafrot Cave, far east of Bravil. He will only appear in the cave once the related quest is active. Depending upon how you choose to complete the quest, he may be killed by a scripted death.

He spends all of his time in Leafrot Hollow, never even sleeping or eating. Because of his high Aggression, he is always hostile and will attack you on sight.

He wears the standard necromancer's robe, a mage's hood, and buckled shoes. He also carries a small amount of gold and the Sands of Resolve, a magic hourglass involved in the related quest. He doesn't wield any weapons, relying instead on a leveled Chameleon spell, a lower-level (Novice or Apprentice) on target fire damage spell, and a lower-level Summon Undead (ghost, zombie or skeleton).