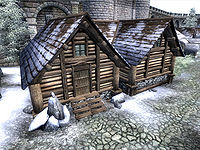 Bruma House for Sale is a house for sale in eastern Bruma, between the main gate and Baenlin's house.

This house can be purchased from Countess Narina Carvain for 10,000 gold, and 9 upgrades can be purchased from Suurootan at Novaroma for a base cost of 1100 gold each. The dialog to purchase the house from the Countess is not available if your infamy is 10 or more until Lifting the Vale has been completed. Before any upgrades are purchased, the house is rather bare with a table and a single chair in front of the fireplace in the southern room of the main level, and a double bed in the southern room of the lower level.

The upper sitting area upgrade adds a small table and chair with a candle holder next to it, a bench with a narrow table that holds a vase of flowers, and a large square rug to the entrance area. The upper storage area upgrade adds two clutter chests, a shelf and drawers that holds more clutter, and another candle holder to the area across from the entrance. It also hangs a small painting of elven ruins on the wall and places a small table in the short hall with a vase of flowers and an empty urn on it. The kitchen area upgrade adds a food cupboard in the corner beside the fireplace, another clutter chest on the other side of the fireplace, and a spare rack for the fireplace on the hearth. It also adds a wine rack on the southern wall that holds two bottles of cheap wine and two bottles of Surilie Brothers Wine with two cups on top, a candle holder next to it, and a large square rug in front of the fireplace. A new painting is also hung on the wall above the wine rack. The dining area upgrade places three more chairs at the dining room table, which sits on a new round rug, and the table is set with dishes for four as well as a vase of flowers. A set of shelves on the wall holds a few more dishes. The upper wall hangings upgrade hangs a painting in the sitting area at the stairs, one in the storage area, two in the dining area over the table, and a tapestry in the short hallway with a candle holder on either side.

On the lower level, The lower storage area upgrade adds a set of shelves and drawers that hold dishes and a vase of flowers on top at the foot of the stairs. A bench, chair, and table are added to the area under the stairs on top of a large rug, along with a candle holder in the corner and more candles on the table. The two new barrels and the chest all hold clutter. The barrel added to the doorway into the bedroom holds food. In the bedroom, the study area upgrade adds two empty bookshelves in the corner with candles on top of one, and a desk and chair on the same end of the room with a candle holder next to it. The bedroom area upgrade places a clothing cupboard between the two bookshelves with a flower vase on top, a chest of drawers with clothing on one side of the bed, and a clutter chest on the other. A set of drawers on top of the clothing drawers holds clutter as well, with a vase and a pitcher on top and a candle holder next to it. A large square rug is placed under the bed. The lower wall hangings upgrade hangs a painting over the bed and two in the storage area, two tapestries and four wall-mounted candle sconces in the doorway to the bedroom, and another tapestry in the study area of the bedroom.

†: The Upper Storage Area upgrade also adds a painting that is not mentioned in the note.
††: The note for the Upper Wall Hangings states that you receive five paintings; however, only four are added to the house.