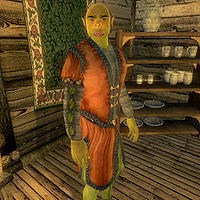 Brokil gro-Shatur is an Orc commoner who spends his entire life in Silverhome on the Water in Bravil.

He sleeps in the first bedroom on the right on the floor above the taproom from midnight to 6am then heads downstairs. At 6pm he eats dinner at the table in the back of the inn, but otherwise he spends his entire time in the tap room chatting to the staff and patrons.

Brokil certainly enjoys his relaxed life. The first time you meet him, he will introduce himself as "Brokil gro-Shatur, Lord High Warden of the Taps, Gilgondorin's most prized customer. I taste everything. Over and over. And over again..." and when asked about Bravil, will reply, tongue-in-cheek, "It is a terrible responsibility, being Bravil's First Citizen of the Ale Tub, but I suffer under the burden like a Sure-Green Orc."

He wears a russet felt outfit and shoes and carries a few gold coins.