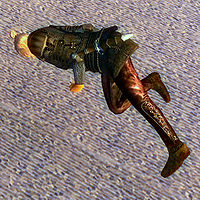 This Altmer thief will be found dead in The Painted World during the quest A Brush with Death. After stealing the Brush of Truepaint from famous painter Rythe Lythandas, the thief leapt into the painting and used the brush to paint a bunch of trolls to protect him inside, causing his own untimely demise.

The thief wore a mixture of lower-class clothing and light armor, a leather cuirass with laced leather pants and huntsman moccasins. Although it did not prevent his fate, he was armed with a steel dagger. He carries a spare collared shirt, the Brush of Truepaint and a small amount of gold.

When you meet Rythe Lythandas inside the painting, he will tell you that you are stuck in the Painted World because of the thief's unwary use of the Brush: "Sorry to break it to you like that, but if it wasn't for that annoying thief, we wouldn't be in this predicament." He will then proceed to tell you what happened: "I was in my studio, when a Bosmer wearing dark clothing accosted me. Before I could call for help, he knocked me unconscious. When I came to, I found that the door to my studio was still locked, and that the thief had snatched my paintbrush. That's when I saw it. There was something on the canvas of my painting that I hadn't put there. It looked somewhat like a troll but it was badly done. Then it hit me. The Bosmer must have leapt into the painting, then painted guardians inside to protect himself using the Brush of Truepaint." He will then elaborate on the trolls that caused the thief's demise: "The trolls that the thief painted seem to have turned on their creator and killed him. He didn't know the Brush had its risks. The creatures are now loose all over the forest and in the clearing where I was still working. The Brush is on the body of the Bosmer thief there."