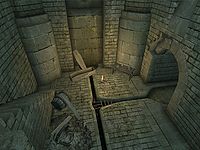 A room within Beneath the Bloodworks

Entering from the Market Sewers through door C, head up the stairs in front of you. In the next room you will find two minor loot chests and a table with a Cure Disease potion, two empty soul gems (petty and common) and a bottle of cheap wine, potentially guarded by an enemy. Press on and you will first come across a door to the South East Tunnel (J) and then a room with a minor loot chest.

Track back to the start and head into the western tunnel - the next room holds a minor loot chest, a couple of hanging corpses and potentially an enemy. Follow the tunnels east and turn the wheel to your left in the second room (cyan dot on map). After dispatching up to two enemies, you will first come across a table with two portions of bonemeal and then another door to the South East Tunnel (K). Ignore this and head north, looting the minor loot chest in the next room. Kill another potential enemy and pass through the gates at I and H, which you opened earlier.

The next room features up to two enemies, one of which will be a mudcrab. Another enemy can be found in the small room to the north, guarding the boss chest (B). Dispatch it and turn the nearby wheel (cyan dot on map), which will open the sluice gates at D and E. After battling with up to two more enemies, you will arrive at gate F. This can only be unlocked with a key obtained during The Ultimate Heist quest. In the room beyond it lay two minor loot chests and the door to the Palace Sewers (G).