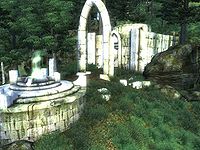 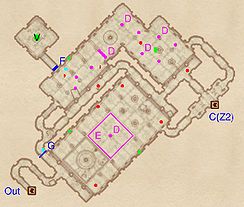 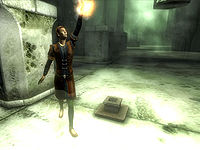 This ruin is structured with chambers and overhanging corridors and enemies located on both. This means that, in the majority of cases, fighting with an enemy in a room will alert one on a corridor and vice versa. To avoid this, use Sneak or try to lure your opponents to areas that you have already cleared out.

Instead of picking gate G, jump down in the room below. Try to avoid the Gas Room Trap E while fighting the four enemies nearby or if you are resistant to gas, use it to your advantage. Work your way anti-clockwise, passing door C to the next zone and brave the various gas traps (D) in the next room, which is shaped like an "L". The secret wall at F is opened by pressing the push block (cyan dot on map) next to it and gives you access to a Varla stone (V). To exit the dungeon, open gate G by operating the push block next to it. 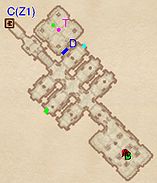 By turning left just after having reached the end of the stairs you will arrive in a small alcove. Pressing the push block (cyan dot on map) in front of you will open the Hidden Door at D, which will reveal a room with a gas trap (T) and a minor loot chest. The room at the end of the corridor contains three Welkynd Stones, the Boss chest (B) and a boss-level monster (A) guarding it. Although theoretically possible, luring the boss inside the gas trap room is quite complex and isn't worth it in general.