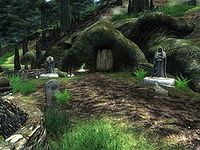 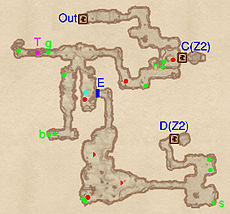 This zone contains all but one of the unenchanted items included in Brusef Amelion's Armor, all thoroughly hidden and worth picking up due to their unique appearance. During the related quest, map markers will point you towards the items requested by Biene Amelion, both of them located in the second zone, the Sarcophagus Chamber.

Upon arriving, go through the empty tunnel until you reach a room with a sole enemy and a hole in the ceiling. Proceed forward until you reach a three-way intersection and pick the path straight ahead as it leads to the unique gauntlets at g and a minor loot chest, both of them in close proximity of a Cave In trap at T. Return to the intersection and find the two paths leading south. Choose the right path for a locked coffin and, hidden behind it, the boots at b. The left path takes you to the rock wall at E, removed by pulling the nearby rope (cyan dot on map). In the next room, fight up to three undead enemies and proceed east through the wood door. The final room contains Brusef's shield behind a broken crate at s and the tunnel leading to the Sarcophagus Chamber through door D.

When you return to this zone from door C, loot the chest and locate the last unenchanted item, Brusef Amelion's Helmet almost hidden behind the wisp stalk plants at h. Finally, jump down the hole and backtrack to door Out, leading outside. 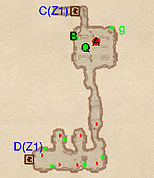 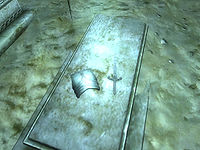 The sword and cuirass

Upon entering from door D, the very first chamber is guarded by up to seven Undead enemies, so be prepared to fight your way through. Loot the many coffins and heal if necessary, then proceed north to the Sarcophagus Chamber and the boss-leveled Undead at A. After the inevitable fight, locate the quest-related Cuirass and Sword in the ray of light at Q, then pry open the boss chest at B. Additionally, Brusef Amelion's unique greaves can be found in the northeastern corner at g. Finally, take the northern tunnel towards door C, leading back to a previously inaccessible area of the first zone, Amelion Tomb.