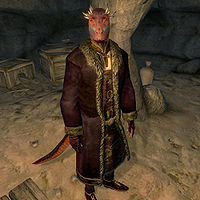 Ajum-Kajin is an Argonian mage, and a high-ranking member of the Blackwood Company in Leyawiin. He is found elsewhere, however, in the Glademist Cave. With Modryn Oreyn's help, he must be kidnapped and interrogated to reveal the secret of the Company, an event Modryn will later immortalize in a painting.

He doesn't exist prior to the related quest, but once it is initiated, he shows up in the northeastern part of Glademist Cave, never even eating or sleeping, comfortably knowing that he has a small army of Blackwood Company guards to protect him. Ajum has taken the easternmost room as his residence. Well-knowing this is only meant as an operational base, he has only graced himself with a bedroll, a few storage containers, a small dining table and a chest containing some decent loot. Two company members stand guard at the entrance of the corridor leading to his headquarters. When you have talked to him, he will reluctantly follow you all the way to Chorrol and into Modryn Oreyn's house; knowing he is up for some rough interrogation.

As befits his rank, he wears upper-class attire: a black & burgundy outfit along with gold trimmed shoes. He also carries a red velvet garment and ten or eleven gold coins. In combat, he relies on a Blackwood cuirass and set of leveled mage spells. Once you have asked him the third and final question, he will equip the Blackwood Ring of Silence. 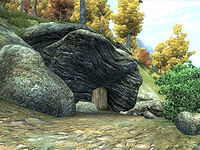 Your will hear the name Ajum-Kajin for the first time when talking to the recently demoted Modryn Oreyn who is keen to destroy the Blackwood Company: "To bring them down, I need more information. My sources tell me they're trying to expand, and they've set up camp in Glademist Cave. I want you to go there and capture Ajum-Kajin, one of their leaders. Bring him back to me. I'd like to spend some time... talking to him." When asked specifically about this 'leader' he will add: "He's the one in charge of this expansion. I know he's a high-ranking member of the group. An Argonian mage, from what I hear."

When you reach Ajum-Kajin in the depths of Glademist Cave he will look at you and comment: "Get away! You will die here!" If you only killed five of his guards and talk to him, he will just comment: "You are a fool to be here." If you killed more than five of his guards, he will instead greet you with a more uncertain: "What do you want? Get away from me!" If there are still any guards left in the cave when you order him to follow you, he will reject you and call for help: "Come with you? Not likely. I know some of my men are still alive. Guards! Attack!" His guards will then come rushing in. When you have disposed of them, Ajum-Kajin will reluctantly accept to follow you: "Fine, fine. I'll come with you. My guards are dead. You win, for now." If you talk to him during the trip back to Chorrol he will just say: "I am beaten. Leave me alone."

Back in his cabin, a satifisfied Modryn Oreyn will comment: "You've brought him back. Good. I want to know the size of their forces, and who is leading them. I also want to know the source of their strength. Do what you must to make him talk. If you can smooth talk him, fine. If you need to rough him up, so be it. But don't kill him. We need him to talk. Now, go tell him to sit down. If he tries to get up, I'll kill him myself." When you talk to Ajum-Kajin he will act strong: "What do you want? Is it time for torture? Hah! Do your worst." When ordered to sit down, he will obey with: "Fine. You don't scare me. Beat me, torture me. I'll never talk to you." He will then take a seat and Modryn will encourage you: "Work on him until he talks. Try not to kill him." and "Make him sing." The interrogation is about to begin and with the helpless Ajum-Kajin in the chair, a few different methods are available. When approached, the Blackwood leader will say: "I won't talk to you! Never! Do your worst." and when you exit conversation will threaten you: "You will pay for this." 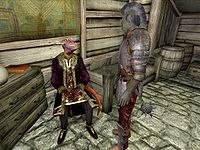 If you choose to ignore Modryn's bloodthirsty approach and raise Ajum-Kajin's disposition to 70+, Ajum will now be ready to talk: "Perhaps you do understand. Perhaps I can help you. A little." If you choose the violent approach, he will instead mourn: "Yes, yes! Enough! What? I'll tell you what you want!" Regardless of your interrogation technique, you will then be presented with three options, which will net you the same answers:

In the second round, if you raise his disposition to 90+, he will change his mind for the second time: "I shouldn't say any more... but you have treated me so well. Perhaps I can trust you." If you instead beat him even further to make him elaborate he will say: "Stop! Please! What is it? What more do you want?" Again, both techniques will net you the same answers, this time from two possible questions:

Ajum-Kajin will then equip the Blackwood Ring of Silence which deals 150 pts of Fire Damage and will die right in front of you. When you talk to Modryn, he will have mixed feelings about the result: "Damn. Killed himself. Must have had some sort of magic item we didn't notice. You got some information out of him, which is good. We can use it."