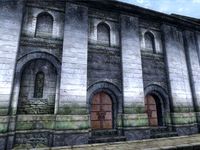 Agarmir's House is a house found in the southern portion of the Talos Plaza District, neighboring Matthias Draconis' House and opposite Ontus Vanin's.

It is the sole residence of the shady supplier Agarmir and consists of three zones: Agarmir's House, Agarmir's Private Quarters, and Agarmir's Basement. 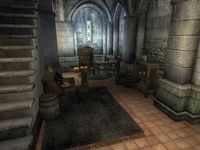 The main floor of the house 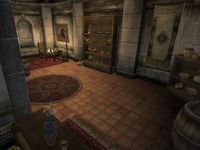 The house is a standard middle-class Imperial City building with three floors: basement, ground floor and private quarters. The ground floor is sparsely furnished and most of the containers there hold nothing other than the usual food and clutter. At the foot of the stairs, however, is an unlocked chest with up to three pieces of leveled equipment. 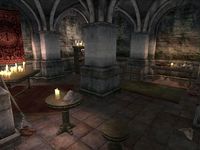 The basement of the house

Agarmir's private quarters are quite small and lacking anything of real value, giving false credit to his cover story as a lowly trapper. Up to six pieces of middle-class clothing (75% each) may be found in the drawers at the foot of the bed, and a bottle of Tamika's West Weald wine on the table in the corner.

The basement is much more interesting, and reveals Agarmir's true occupation. It is finely decorated with numerous candles and littered with bonemeal portions, bones of all shapes and sizes, clothing and blood spatters. A shovel on the western wall and the large tome on the table nearby tell of Agarmir's shady dealings.