After returning to Bruma with the Tome from Mankar Camoran, a guard will alert Jauffre that a group of assassins have entered Bruma with intent of killing Martin. The Champion offers to eliminate the assassins before it is too late. 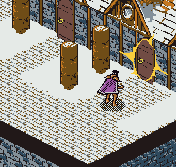 The door on the east side of town

Four assassins hide in the streets of Bruma. Two in the South-East of the map, and another two in the town square close to the North gates. Upon entering the square, the Champion overhears the two Mythic Dawn assassins - Avery and Rylander - discussing plans on opening a greater Oblivion Gate right in the town itself. The Champion must confront the two; Avery is a swordsmen, while Rylander will stand back and fire arrows.

On the far east side of Bruma you can find a flashing door. Inside the building are a pack of Mythic Dawn cultists with three Oblivion Gates; they will attack the Champion on entering. Making contact with any gate will send you into the planes of Oblivion.

The planes are a relatively simple level. There are several Mythic Dawn Agents throughout, but you must merely activate the Sigil Stone - which can be found on the most southern area of the map.

Activating the stone will complete the quest and return the Champion to Bruma.