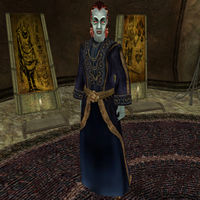 Uvoo Llaren is a Dunmer monk and quest giver for the Tribunal Temple. She is found in Ghostgate, in the Temple between the Towers of Dawn and Dusk. She offers medium training in Hand-to-hand, Acrobatics, and Sneak to those who rank high enough among the Temple.

She wears an expensive robe and a pair of common shoes. Aside from her natural resistance to fire and the sanctuary provided by her ancestors, she knows Balyna's Soothing Balm and Ogrul's Quick-Again.

"The Temple does not proselytize, but we do good works. Assantus Hansar is an ill Ashlander in the outcast Ashlander camp of Ahinanapal which is just south of Ghostgate. Find and cure him. You may need a way to calm him, for outcast Ashlanders are often aggressive towards strangers."

Once he is cured:

"So Assantus Hansar has been cured? Good work, %PCName. Take these potions in case you were infected as well."

If he is dead:

"Assantus Hansar is dead? How unfortunate. Perhaps you can find someone else to cure in the Temple's name."

Food and Drink for the HermitEdit

"Take this food and drink to Sendas Sathis. He's a hermit who lives on Shuran Island between Sheogorad and Vvardenfell. Take a boat to Dagon Fel and then go towards Rotheran. Shuran Island is just west of Rotheran. I will mark this stronghold on your map."

If spoke to again:

"I gave you the food and drink you need. Four kwama eggs and four bottles of Mazte. Take them to Sendas Sathis."

If Sendas is dead:

"Sendas Sathis is dead? This is terrible news. Perhaps you can find some other duties."

Once you have given Sendas the food and drink:

"You delivered the food and drink? Good."

If asked again about it:

food and drink
"Sendas Sathis should have enough supplies at the moment."

"Many sacred relics of the Temple have been lost to the Sixth House. I want you to recover a relic that I believe is in Lost Kogoruhn."
Lost Kogoruhn

Once you return with the Hair Shirt:

"Yes, that is the Hair Shirt of St. Aralor. Will you hand it over to the Temple?"

Yes, here it is.
"Good. I suppose this means that Feril Salmyn is dead? It is unfortunate, but at least the relic has been returned."

No.
"That is a priceless relic. It should be in the Temple's care."

"Mendel Eves carried the Cleaver of St. Felms the Bold. He was a brave and honorable Buoyant Armiger, but he fell fighting on the northeast slopes of Red Mountain in an Ash Vampire lair known as Tureynulal. Recover the Cleaver from the hands of our enemies and return it to the Temple."

Once you return with the Cleaver:

"Is that truly the Cleaver of St. Felms the Bold? Will you return it to the care of the Temple?"

Give her the Cleaver.
"Good. I assure you I will be most careful with it."

Keep the Cleaver.
"I am disappointed by your loyalty. And by your lack of faith."

"The former captain of the Buoyant Armigers, Voruse Bethrimo, fought against the terrible creatures of Dagoth Ur, but was slain while protecting those under his command as they retreated. He carried the Crosier of St. Llothis, a holy artifact which is now in the hands of our enemies. You may wait until you are stronger to take this last quest, but I ask you to go to the depths of Red Mountain and retrieve the sacred Crosier of St. Llothis."

If spoken to again without having the Crosier:

"Have you retrieved the Crosier of St. Llothis?"

Yes, here it is.
"I am sorry, but I do not believe you. Bring me the Crosier."

No, not yet.
"I am disappointed, but if you do not believe that you can retrieve it, I will not force you to try."

Once you return with the Crosier:

"Have you retrieved the Crosier of St. Llothis?"

Yes, here it is.
"Yes, this is the Crosier of St. Llothis. I can feel his undefeated spirit within. You have brought great honor to the Temple, %PCName."

duties
"I have no more duties for you. Speak with Endryn Llethan in Vivec or Tharer Rotheloth in Molag Mar."