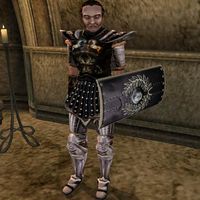 Strillian Macro is an Imperial spellsword and Trooper of the Imperial Legion who is currently stationed at the Gnisis Barracks. He has served with several garrisons across Vvardenfell and as a result has become quite knowledgeable about his trade. He will be more than willing to share his knowledge with anyone who is interested.