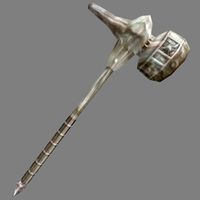 Lalatia Varian at the Imperial Chapels in Ebonheart will ask you to recover the powerful warhammer named Skull Crusher, which was stolen way back in the First Era. Varian will relate to you another strange vision which might reveal the location of the item. She saw a Daedric ruin with a forge of molten stone, sealed by fallen rocks, though the forge can still be accessed through the Halls of the Dead. Varian suggests that you talk to a Dunmer Scout to find out the meaning of her vision.

Find any Dunmer scout, such as Nalasa Sarothren at the Elven Nations Cornerclub in Vivec's Hlaalu Canton. Nalasa will suggest that you try the ruins of Anudnabia (east of Sadrith Mora). You can also talk to any Dunmer Savant, such as Llaalam Dredil at the Grand Council Chambers, who will equate the Halls of the Dead with any Dunmer ancestral tomb. Putting the two together yields that you are looking for an ancestral tomb near to Anudnabia.

The nearest tomb to Anudnabia (which you cannot actually enter) is actually visible (barely) from the shrine: the Omaren Ancestral Tomb (should be on one of the most eastern islands east of Sadrith Mora). From within the tomb, you can access the shrine and reach the Forgotten Vaults of Anudnabia. Jump onto the anvil to reach the Skull Crusher, which is in a chest suspended over the forge.

Return to Lalatia Varian with the warhammer, which you will get to keep. In addition, if your Blunt Weapon skill is less than 40, you'll receive the magical ring Foe-Grinder. If it is greater than 40 you will receive the less powerful Foe-Quern. This is the last quest you'll receive from Varian.