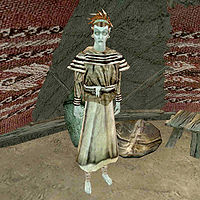 Shara is an Ashlander huntress living in the Urshilaku Camp who happens to share a name with the tower Shara. She is not particularly notable for any other reason. It is possible that she is the Shara mentioned in a suicide note found in Tribunal, but this is unlikely, as the note mentions her having a house, which would be a rather generous description for the small yurt she lives in with Ninirrasour. Yet a fourth Shara can be found in a small camp in the Grazelands. Again, it is doubtful that any of these are related in any respect beyond having the same name.