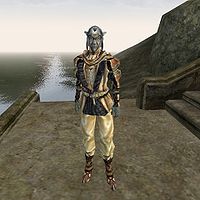 Rovone Arvel is a Dark Elf noble of House Hlaalu and owner[1] of the Arvel Plantation. As such, he is one of the biggest slave-holders in Vvardenfell. He can be found on the plantation docks. He is clad in exquisite clothing from top to toe.

Rovone Arvel is currently in a land dispute with the corrupt Hlaalu noble Odral Helvi. He is one of the people you can turn to for help during the related questline. Also, despite being a slave-owner, he is the honest man in this particular dispute. He also maintains good relations with the Imperial Cult, allowing free harvesting of corkbulb root on their behalf, from his own land or that of his tenant farmers.

Like fellow plantation owner Orvas Dren, he also has a younger relative engaged in abolitionism - albeit probably a more distant relative, since Galyn's family has apparently been in Ald Velothi for some generations now, according to local talk.