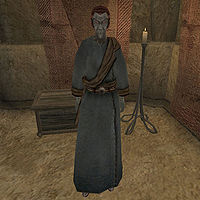 Rirnas Athren is a Dark Elf priest who sells potions, spells, and spellmaking services to any who need them at the Hlaalu Temple, which can be found on the lower level of the Hlaalu Waistworks in Vivec.

Rirnas has the following spells available for sale: