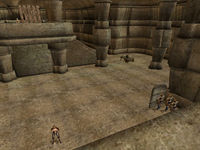 ToddTest is a hidden area used by the developers for testing.

It is only accessible through the console, using the command COC "ToddTest".

Toddtest, like the name says, is used as a debug room where almost every aspect in the game is tested. When you enter the room, a large light brown bowl is seen. This bowl, when activated, will make you super strong and give you necessary items and spells to test various parts of the game. It will also infect you with Porphyric Hemophilia (Berne variety).

There are five leveled beasts, a Steam Centurion and six NPCs, three of whom are Ordinators. There are also multiple treasure chests containing one piece of nearly every item found in the game (Artifacts not included). The room is a copy of the Puzzle Canal underneath Vivec's palace, without the water. Installing Bloodmoon will also add three chests for items only found in that expansion. Several quest items may be found here- there is a chest containing all the books in the game, which can be used to complete quests such as the Telvanni Stronghold quest where you are ordered to find the 'unique' book Secrets of Dwemer Animunculi. You can also find the Bittercup and Azura's Star containing the soul of an Ogrim on a table near the back of the room.