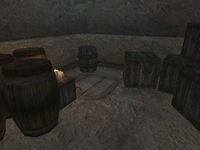 The secret entrance to the secret guildhall

The Vivec Morag Tong Guildhall is the headquarters of the Morag Tong. 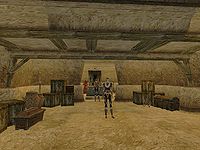 Eno Hlaalu is the Grandmaster of the Morag Tong. He can be found in the upper level of the guildhall, and is the only NPC that can enlist new members into their faction. Minnibi Selkin-Adda is one of only two mages that sell the frenzy creature spell. Rogdul gro-Bularz provides restocking master picks and probes.