The UESPWiki – Your source for The Elder Scrolls since 1995
< Morrowind: People / Spell Merchants
Jump to: navigation, search 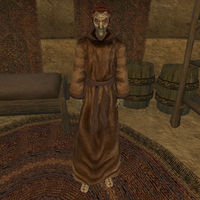 Minnibi Selkin-Adda is a Dunmer nightblade in the Morag Tong Headquarters underneath the Arena Canton of Vivec. He sells spells to fellow Morag Tong members of rank Thrall or higher.

He wears a chitin cuirass with matching greaves and boots, a common robe, and a third barrier ring. He also carries a devil tanto, common shoes and 14 gold.

Minnibi has the following spells available for sale:

Additionally, Minnibi is one of only two people (the other being Uleni Heleran) who can sell you a Frenzy Creature spell.