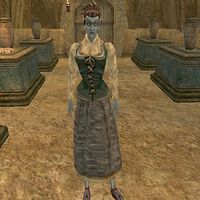 Minabibi Assardarainat is a Dark Elf apprentice wise woman of the Ahemmusa Tribe who was sent by Sinnammu Mirpal to calm the spirit of Kanit Ashurnisammis in the Favel Ancestral Tomb as a punishment. If you help her with this task, she may be able to arrange a meeting with a wise woman that Skink-in-Tree's-Shade of the Wolverine Hall Mages Guild is interested in.

When you first find Minabibi in the Favel Ancestral Tomb, she has the following things to say about arranging a meeting with Skink and the reason why she is in that tomb in the first place:

After you have dealt with the restless spirit, she will indeed be willing to speak with Skink in the Sadrith Mora:

You can later find her in the Mages Guild Hall in Sadrith Mora, where she, contrary to what her mentor seems to think, is actually quite happy: