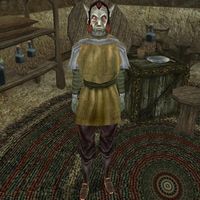 Menus Felas is a Dark Elf farmer who resides in his farmhouse in Vos. He appears to have recently moved to the town as evidenced by a note and a bowl of kwama eggs found in his home that was given to him by Ienasa Radas as a housewarming gift. Another note in his house reveals that he recently purchased a bed from Berwen which he probably hopes to soon replace the simple bedroll in his home with.

He wears a common shirt, pants, and shoes. He carries an iron mace. Aside from his natural resistance to fire and the sanctuary provided by his ancestors, he knows no spells.