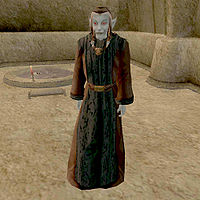 Llathyno Hlaalu is a Dark Elf priestess at the Balmora Temple. She offers books, ingredients, and potions for sale, along with spells and custom spellmaking services. She has two skill books for sale, 36 Lessons of Vivec, sermons 14 and 34, which will raise your Spear and Unarmored skills, respectively (though you could just read them on the shelf behind Telis Salvani - he won't mind unless you take them). Alchemists may note that she is a restocking vendor of the following ingredients: Gravedust, Kresh Fiber, Muck, Resin, Scrib Jelly, Scuttle, Stoneflower Petals, Trama Root, and Willow Anther.

If you ask her for the latest rumors, she'll say: "Ranis Athrys in the Balmora Mages Guild has something against wizards who aren't in the guild. I think it has something to do with her parents, who were murdered by the old Telvanni Archmagister, the one before Gothren."

* This spell is actually useless, since you can't cast spells while paralyzed. However, you can use it to learn this effect in order to apply it to custom spells or enchantments.