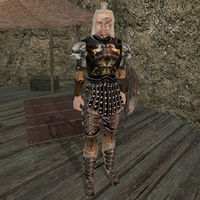 Honthjolf is a Nord knight, hiding out in Aharnabi, a cave located south of Azura's Shrine on Azura's Coast. It seems that Honthjolf is in a little trouble with the Imperial Legion, so he deserted, and they want you to kill him. However, he is aware of this; he is hostile and will attack you on sight. He wears an Imperial steel cuirass, Imperial chain left and right pauldron, netch leather greaves with matching boots, left and right leather bracer, common pants with matching shirt, and wields an Imperial broadsword as well as an iron shield. Aside from his natural resistance to shock, immunity to frost, ability to shield himself, and a natural frost damage spell, he knows no spells.