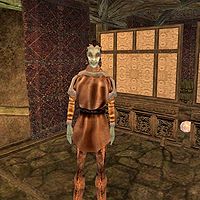 Hlodala Savel is a Dunmer savant who serves House Hlaalu, offering training to higher-ranked members. She will not appear until you have partially built your stronghold. If you are a member of House Redoran or House Telvanni, she may attack you instead. Hlodala also buys and sells books, though she has none available for sale initially (you can only buy books that you have sold to her previously).

Hlodala bears the distinction of being the second-highest trainer of Mercantile, second only to the Master Trainer, Ababael Timsar-Dadisun. Though this is a dubious honor, as she will only train up to skill level 59, leaving you stuck with Ababael for any more advanced training. Note that after you're sent to kill her master, Raynasa Rethan, you won't be able to speak or train with her anymore. She also offers medium training in Speechcraft and Short Blade.

She wears a common shirt, common pants, and common shoes. She carries a silver viperblade and 60 septims. Aside from her natural resistance to fire and the sanctuary provided by her ancestors, she knows no other spells.