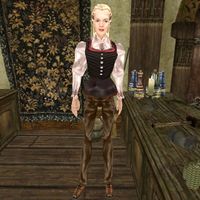 Hjotra the Peacock is a Nord pawnbroker who runs the renter rooms at The End of the World in Dagon Fel, where she has a variety of goods available for trade.