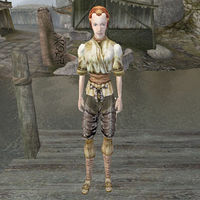 Haema Farseer is a Nord shipmaster whose vessel, Arrow, can be found docked at Dagon Fel. For a price, she will provide transport to Khuul, Sadrith Mora, Tel Aruhn or Tel Mora. Aside from her natural resistance to shock, immunity to frost, ability to shield herself, and a natural frost damage spell, she knows no spells.

"My ship, the 'Wild Rover,' can carry you from Dagon Fel to Sadrith Mora, Tel Mora, and Khuul."